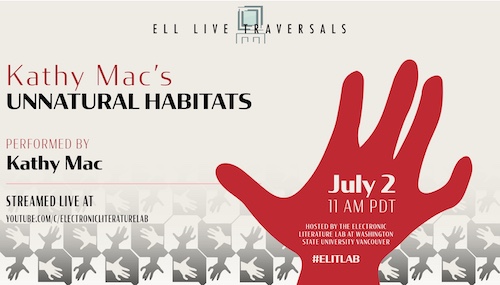 Authors of hypertext fiction tend to admit that their prose is a form of poetry. Not entirely in a traditional sense, when prose gets closer to poetry through semantic and stylistic means and becomes “poetic prose” or “prose poetry”, but from a more pragmatic perspective of reading and accumulation of meaning on the reader’s side. In this sense, hypertext fiction is poetry because its node-link structure allows for meaningful shifts of argument, pace, point of view, and other narrative and descriptive devices. Mark Bernstein called hypertext link a new punctuation mark. But in hierarchy of stylistic and poetic tropes hypertext link ranks much higher. It deserves a status of the new enjambment. Among authors who embraced Storyspace as a writing tool, the poetic potential of links as enjambments was explored extensively, often to a point of such saturation of poetic effects – which I understand, after Victor Shklovsky, as “estranging objects and complicating form”– that they were able to sustain the work without the use of for another trademark tool of hypertext writing in Storyspace: the Map View. Michael Joyce’s afternoon. a story and Kathryn Cramer’s In Small and Large Pieces can be read as poetry due to their skilful, artistic use of hypertext link. Yet they do not allow for alternative, visual navigation on the Map View. Shelley Jackson’s Patchwork Girl, on the other hand, represents the second group of works. Their authors Storyspace map just as a painter would use canvas. It becomes an alternative, visual mode of representation that contributes the work’s signification process on an equal footing to its linguistic counterpart. In case of Patchwork Girl one could even argue that the series of Jackson’s iconic collages made on Storyspace map outlived the textual content, as far as cultural reception of the work is concerned.

There is a third group of Storyspace hypertexts, and it includes works that aim to utilise poetic potential of both hypertext links and hypertext maps. Among these, Unnatural Habitats by Kathy Mac is the most representative, consistent and most beautiful example. Perhaps not surprisingly, because as a collection of interlinked poems, it represents hypertext poetry in most literal, not only metaphorical, manner. Advertised as “poetry of primitive submarines, crippled spaceships, and basement apartments”, the hypertext of Canadian poet explores many different ways in which people make their own habitats unnatural, inhabitable and hostile. After the initial screen, a black and white bitmap illustration, readers are presented with a simple table of contents with 13 different destinations (including the “Directions”). These points of entry are divided into three groups separated by horizontal lines. The top group leads to poems about unnatural habitats in physical realms: space, mission control for space flights, air, underground, war in Kuwait, submarine (“Apollo 13 reentry”, Apollo 13: interface”, “Mining the perfect monument”, “Testimonial: Kuwait, April 1991” ,“Alberto Santos Dumont”, “Submarine patrol 1915” . The middle group represents social habitats deemed unnatural: a virtual reality of a gaming addict in a basement, a domesticated dolphins’ release into open seas, a collaborative quilt practice in memoriam of AIDS victims from the late 1980s, and a poetic reflections on Sharia’s positioning of women in marriage filtered through author’s experience of growing up in Pakistan.

When reading the “habitats”, each comprised of up to a dozen of lexias, our progress is accompanied by its alternative spatial representation on the Storyspace Map, and – most importantly – by the visual, spatio-temporal enactment of such progression. In other words, it is not only the visual arrangements of lexias on the map that contributes to our understanding of, or our immersion in, the habitat in question, but also a series of animated frames marked on a map as the readers goes through the poem. The units of such stop-motion animation within the broader frame of Storyspace workspace are lexias that are currently in focus, with their content displayed in text windows, and with their position within the current habitat, and their connections, visualised on the map. By activating default links between lexias, readers experience the linguistic realm of traditional verse, the visual realm of concrete poetry that accompanies it, and also replay and enact semantic and visual tropes along animated paths orchestrated by the author. What connects these three realms – linguistic, visual, physical – is a unifying image, a form of local, conceptual metaphor, which expresses the main theme of the poem (or part of it, metonymically) on all levels.

For example, in “Submarine patrol 1915”, one of the shortest poems in the collection, composed of just 4 lexias, when reading about a submarine crew descending from the surface into the greater depths of the Sea of Marmara, the text itself is displayed in a descending fashion: it starts from the top of the window in the first lexia, and ends at the bottom in the fourth text window. Yet it is the reader who puts the text of the submarine poem into a downward motion by activating the default sequence. In “Alberto Santos Dumont”, a poem dedicated to the Brazilian aviation pioneer and inventor, readers are invited to recreate a pattern of a flight, in “Dolphin” – the sea mammals’ jump over the water, and in “Quilt” – a quilting pattern. Such re-enactment of a visual metaphor related to the main theme of a poem happens either on Storyspace Map, in text window or within a wider Storyspace canvas delimited by the borders of our computer screen. In this last case, part of the story (the poem’s central motif) is told visually by arrangement of different shapes and sizes of text windows. In case of “Quilt”, the reading proceeds on alternating small and large square windows. By changing their positions on the screen, windows unveil a cross-like pattern. Additionally, thanks to semantic, visual and symbolic proximity of lines, links and threads, the central motif of the “Quilt” group echoes across various levels even more prominently: the reader’s eye follows active (currently read) lexias on the map as they criss-cross the arrangement of text containers along black lines representing both the actual hypertext connections and the referenced threads of the quilt: all set in motion by readers following the default, authorial sequence. In the same fashion, one can guess, following the trajectory of active nodes on the “Oriental” group’s visual layout might allude to the act of tying a headscarf. In this way – by visual and kinetic means – Storyspace map serves as an abstraction of selected figurative elements of the poem in question.

The third and the last group of visual, concrete and animated poetry in Unnatural Habitats consists of “Weftwork” and “Warping board”, two unique designs in which a poem is composed out of fragments of other habitats. These remixes, not random or free-form, but carefully orchestrated by the author, challenge our own ability of making connections between disparate images and ideas. Although the mechanics and poetics of the main poems are still at play and just as before one traces important visual clues with each passage, the main quilting work this time happens in the mind of the reader who is challenged to make her last hermeneutic effort of establishing connections between the parts and the whole, software and writing, poetry and life.

In one of his last theoretical statements, made on a conference in Poland just a year before his death, Umberto Eco reminded future generations of critics that we can speak of semiotics whenever we can translate one order of sings into another, compare existing language to some new one. Unnatural Habitats, published in 1993, solidifies and summarizes the rudimentary, but beautiful language of Storyspace environment, the language that comes to light when poetry is “translated” into the node-link structures of hypertext, and projected onto visual maps of nodes and connections between them. The grammar of this language is comprised of units that were still foreign to the language of poetry at the time of writing and publishing of Mac’s work: shapes, sizes and positioning of text windows on the screen; a rudimentary font and colour palette; lines and rectangles on the Storyspace map – their visual arrangement and proximity; link names and node titles’s highlighting. These elements themselves populate a habitat that was once unnatural to poets and which authors such as Kathy Mac made habitable for all future readers. At the same time, by successfully proving artistic use of new grammar of hypertext software, the Canadian author adaptability of poetry in new habitats as something universal.

The traversal of Kathy Mac’s hypertext poetry, read by the author and read by the author and hosted by Astrid Ensslin and Dene Grigar, is available on Electronic Literature Lab’s Your Tube channel. The full documentation of the work and its traversal, along with critical essays will be included in the forthcoming volume 4 of Rebooting Electronic Literature.