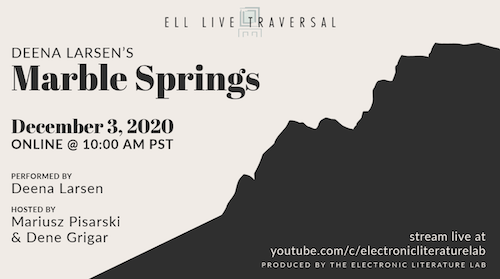 Another unique occasion to meet the author reading her own digital work from 20 years ago on original hardware and software comes tomorrow, Thursday the 3rd during the Live Traversal of Deena Larsen’s Marble Springs at the Electronic Literature Lab. Come on join us for the live event! Below a short overview of the work by Mariusz Pisarski:

The Hill, an introductory poem of the Spoon River Anthology by Edgar Lee Masters, is an epic style invocation with a series of repeated questions about the whereabouts of dead citizens of the town, each called by name, and a refrain “all are sleeping on the hill”. Because the fate of the deceased is just shortly mentioned, reading the poem today makes us want to activate the cross-referrals: each name begs to be converted to a link and take us to a more detailed story of its bearers life and death.

This is what Deena Larsen wanted to do with Lee Masters’s poems since her childhood and what she implemented in Marble Springs a collection of hypertext narrative poems published in 1993. Released on Hypercard by Eastgate Systems and read on 8 inch screens of Macintosh Classic II, Marble Springs converts Edgar Lee Masters’s formula into an engaging matrix of stories about the small mining town in Colorado. Each poem in the collection recreates key events from a live of a single character, mostly a woman, and includes several links to her family members, neighbours, institutions she affiliates with or “moods” which connect her to other characters.

The overarching narrative is framed in a classical story within the story structure: a heap of notes and writings about the denizens of Marble Springs is found in the tree trunk by the church. The reader, presented with Hypercard stacks which organize the notes into characters’ profiles, main text, margins and bibliography related to their stories, is given a task of exploration and discovery. There are several interface layers, clickable maps, and character connections’ diagrams. Readers are encouraged to return to the maps of the valley, the town, and graveyard, as well as to the index of names and places. This way the shared histories of women in the American West are being connected in a unique way, not only by following implicit links, but also by discovering “secret areas”, discovering additional meaning in illustrations, additional patterns in graphical layout (even the thickness of lines connecting persons of places represents some important aspects of their lives). An element of a programmed randomness is also at play: clicking on the same graphic or even an empty space on the map can take readers in different directions on their second reading. 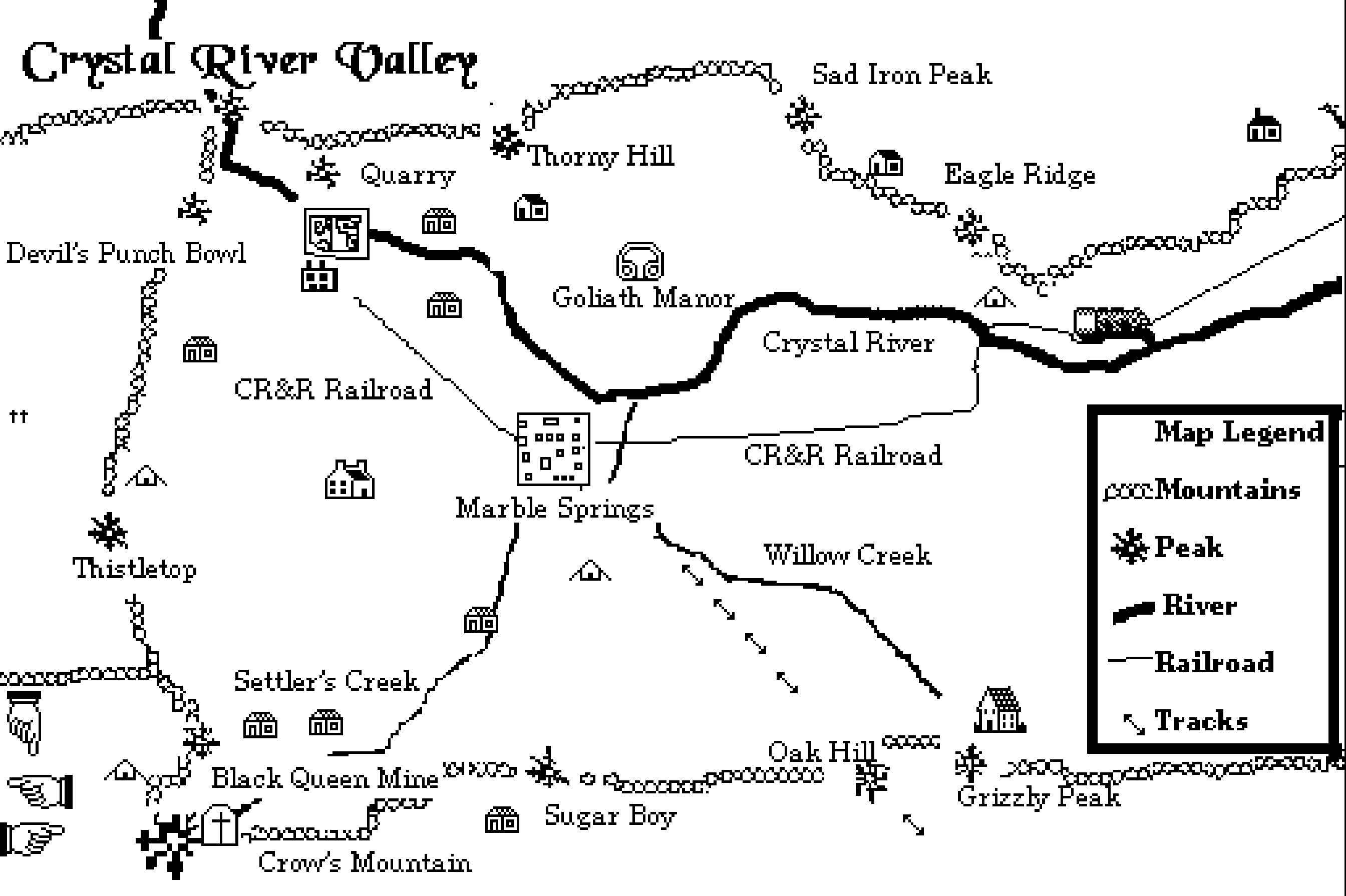 Lee Masters’ narrative idea of “democracy in death” where every inhabitant of the graveyard in Spoon River Anthology tells their own story in their own voice in Marble Springs gives way to a decidedly woman’s perspective. This is a hypertextual western, but instead of brief glimpses of women behind the scenes, it delivers a full female voicing of the experience of American West, the world of domestic abuse, abortions, prostitution, where women are gambled in card games or gang raped. At the same time Marble Springs demonstrates how progress and hope in communities was spurred and cultivated by women’s solidarity and self-organising skills (represented by Ladies Aid Sewing Circle and Rescue Society). Larsen’s work is another great example demonstrating how electronic literature, from its early stages, was able to accumulate feminist discourse and storytelling by women and about woman.